Eusebio Martinelli was born in 1976 and began studying the trumpet at the age of 8 under the guidance of maestro Neldo Lodi, the historic solo trumpet in Sergio Leone’s most famous films.

He began his artistic career at a very young age as solo trumpet of the legendary Castellina Pasi Orchestra and in his early twenties he set off on many trips including Brazil, California and Australia in search of a maturity and musical and compositional growth that would prove to be very important. Upon his return to Italy, he began a long and intense collaboration with Vinicio Capossela. He also plays with Negramaro, Biagio Antonacci, Modena City Ramblers, Calexico, Demo Morselli, Kocani Orkestar, Mauro Pagani, Saule, Mark Ribot and many others.

– Four albums with the “Eusebio Martinelli Gipsy Orkestar” project (Gazpacho, Apolide, Danze and Sbam!) which have given rise to tours throughout Europe and hundreds of shows with great musicians. With La Eusebio Martinelli Gipsy OrkeStar also realizes “Fricula” with the Sud Sound System and “Tratto Leggero” with Cisco and Tonino Carotone and both of these singles obtain the highest radio positions. 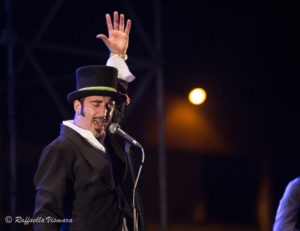